I’m done with a very mixed unit of 20 skeleton warriors. Later I won’t use the Sepulchural Guard as regular rank and file troops but for now they add some interesting variaty. It all went quite fast following the ‘hexwraiths made easy’ tutorial from Warhammer community. Great guide, make sure to check it out! I usually don’t use washes that much but now I can’t see a good reason to go back to my old techniques with tonnes of layering. Well, that it for now! 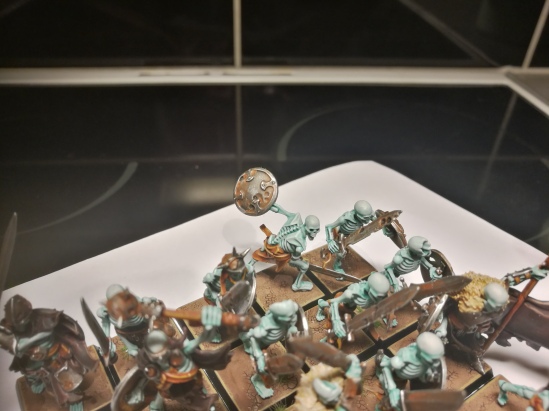 It is 12 years since I’ve began painting on a vampire counts army for Warhammer. I completed one skeleton. Some days ago picked up the old project again. A little bit easier and faster painting scheme this time. I magnetized the bases which makes it possible to switch between round and square allowing me to field them as both Age of Sigmar and Warhammer models. I went for a magic glowing theme making the skeletons glow like Etherals. It’s a bit different to the standard old bones scheme. Anyway, here’s some wip pictures! 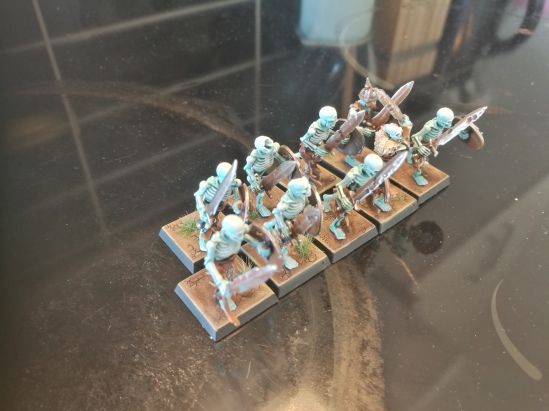 A year ago I bought these totally awesome pieces of uselessness. I don’t really know what to do with them but maybe some paint could help. So I’ve started my favorite painting technique: RUST! Not really completed yet though. Need some more details but then they be ready for something 🙂

I’ve started a Van Saar gang once before but it never reached the Underhive. It was a bit easier this time without the need to convert the models. Still I did some head swaps with noble empire heads. I went all in on the upcoming customization of the gang, magnetizing both heads and arms to be able to change later. The color scheme was pretty simple. I left most of the model unpainted… But sprayed with standard mechanicus grey and then highlighted. The skin tone is pretty pale due to the poor health of the van Saar house. That’s about it. Here’s some pictures: 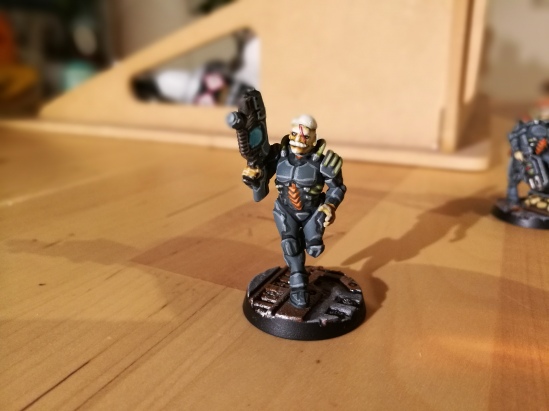 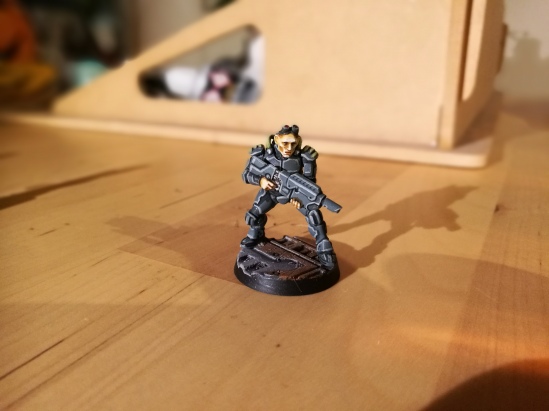 After some hours of painting I’m done with the markers from the necromunda box. It quite a quick fix. I wanted to make the crates and terminals to stand out from the rusty bulkheads representing that they are actually not abandoned. Here’s some pictures :

After yesterdays battle with the zone mortalis rules I got inspired to paint some of the terrain from the start box. So I undercoated the doors and barricades with mournfang brown, strippled them with slayer orange and finally drybrushed with runefang steel. I added some nuln oil to some of the recesses. After those steps the doors were quite ready for battle but I wanted some more details adding some graffiti, posters and more washes. Super quick! Over and out. 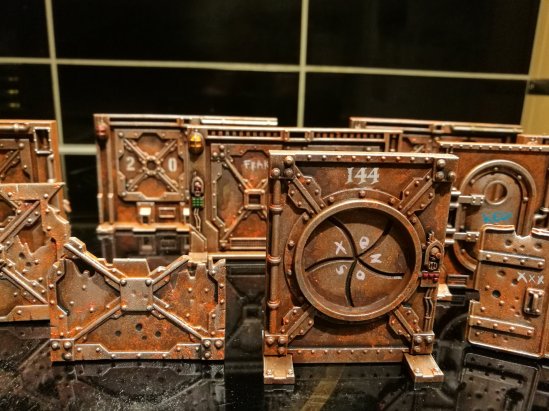 During the last month I’ve been playing two games of Necromunda. One with the Gang War I rules and another with the Zone Mortalis rule set. I think the new rules are wonderful. Everything I’ve been thinking about that needed fixing is fixed. Especially the “I go – you go” turn sequence. Good to get rid of that 18 years into the new millenia. To move one fighter at a time were actually one of the house rules we made before the new edition. What I also like is the chain activation making leaders use their leadership to more than just morale. There are so many things I like with the new rule set but just to mention some of them: Ammo aren’t gone forever when failing an ammo test. The game is somewhat streamlined and quicker. Finally the campaign system is not so complex anymore making it more available for people like me which can’t play a game every other night.

Another good thing that has nothing to do with the rules is the feel of the game. I think GW was successful in keeping the good part of the 80ies punk feel but leaving the blood red era behind.

Here’s some pics from this amazing revived game!

I’ve been working on a little bit of everything. After the last battle I think I need some more marines kitted for close combat. Some hours later I’ve got these two darlings.

Last time I used a proxy Plague surgeon and I really liked the effects on the troops so I decided to make a real one. I made some injections from some old Dark Eldar bits. 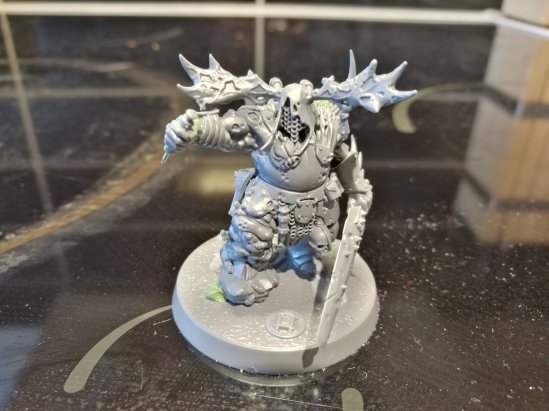 I needed some more characteristic Nurgle stuff on my land raider so I added some scythes and bells. Feels complete now.

Finally I’ve made some small progress on the new helbrute. Not a big update but still some covering of Khorne runes with some yucky slime. Here’s some WIP pics.

I’ve made some progress on the Rhino this week. The green hull is mostly done and now only the details are left. Famous last words….

I (Mr Huggert) found a chaos land raider in my extended bit box. Yay! It saved me 550 kr or 55 euros. Right now I’m in the progress of nueglifying it. When found it was heavily converted to a world eaters land raider so it cost some blood to turn it back to papa Nurgle again.

Finally I found an age of sigmar converted Khorne helbrute. Hmm… What to do? Replace the head with a nurgling. I’ll make some more conversions later. 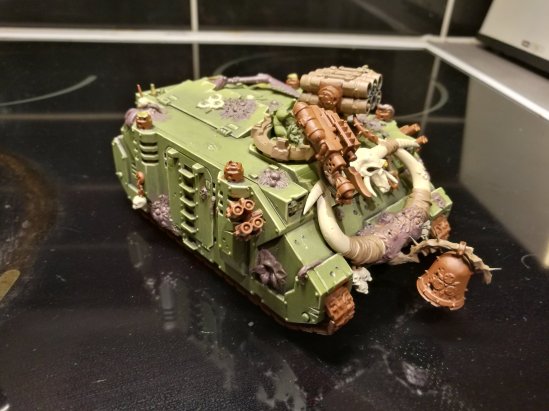 I just had to add some more yuck to the Rhino after browsing the internet for cool ideas. I found this YouTube video and tried it myself without taking it too far I hope. 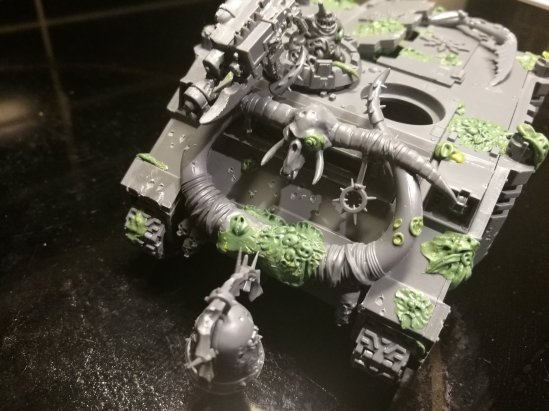 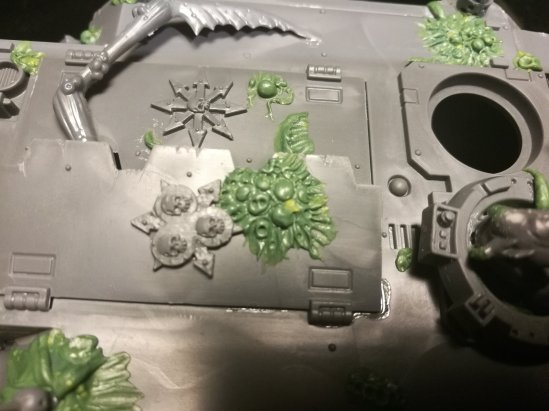